Imagine Knowing The Exact Dates The Stock Market Was Going To Reverse..Weeks And Sometimes Months In Advance! Look At Some Of Woody’s Market Timing Calls Below-THERE IS AN IMPORTANT “KILL ZONE” CRASH DATE APPROACHING!!

MARKET TIMING: Any trading initiations can be entered against the highs of this week. Tomorrow will likely be a big day. Bart may get his shoe in vote after all the drama, but stocks may not throw him any party. It may barf again.   As noted, the next turning point price pattern is near 10/10. I still foresee a notable relief rally in Dates Are For Members Only. That may be followed by more weakness than anyone expects into Dates Are For Members Only. Still, in this confusing chaos there is not in my work a really defined timing code. It is what it is. 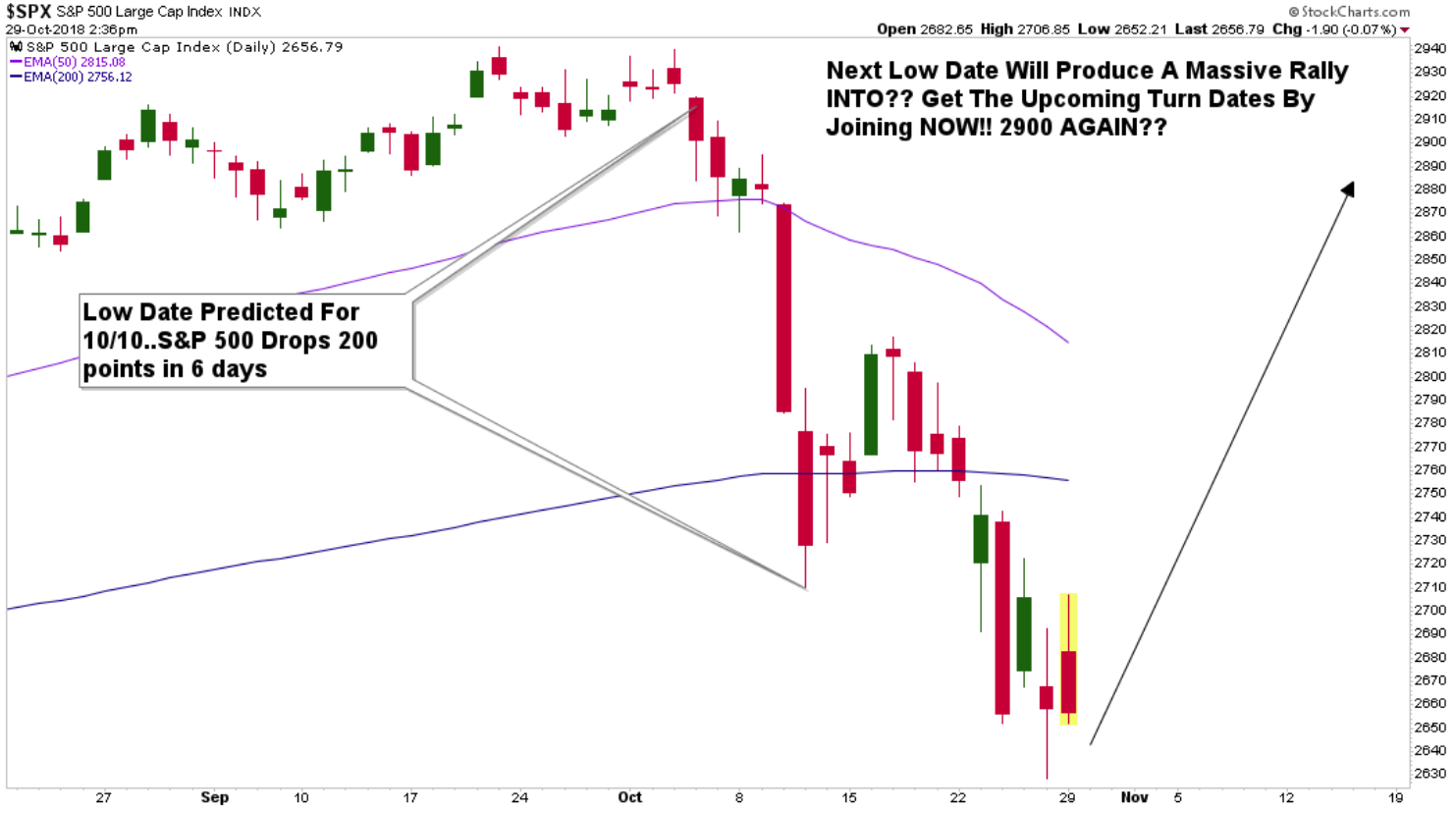 MARKET TIMING: The allowed “spike into 1/8-9” was due to run out of upside momentum. Again, “the next best timing profile is for a trading low near 2/10-17.” Yes, that is a ways from here but is never the less a cogent timing profile. Now, nearer term stocks have not turned down and this allows some secondary strength into maybe 1/25ish. 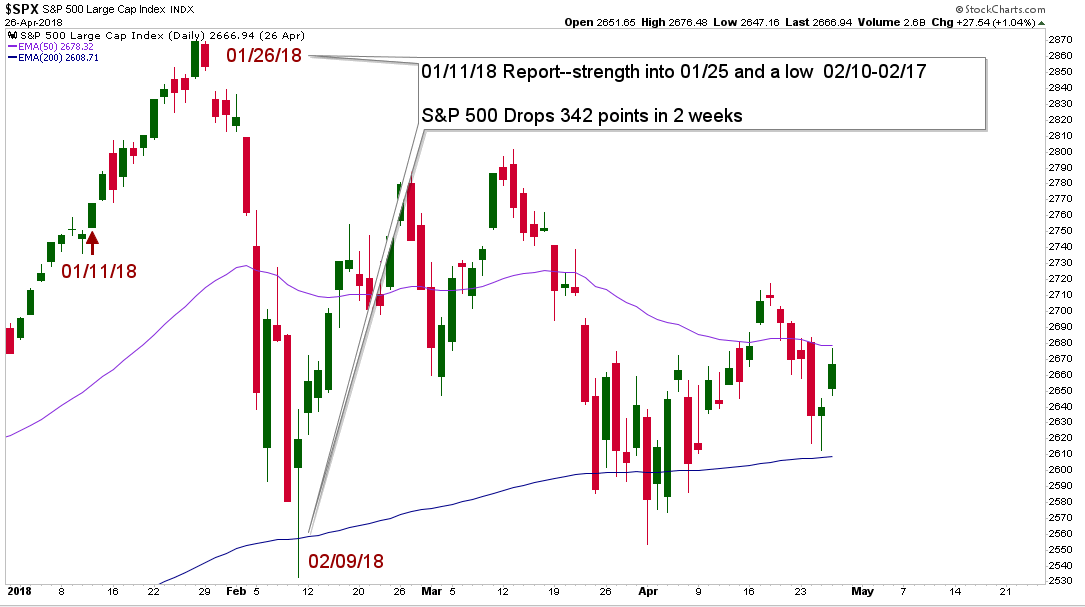 MARKET TIMING: As I noted on Monday morning of 2/12: “The preponderance of indicants suggests that the trading low was registered on 2/9.” No change: Stocks and the VIX did bottom and the profile was for bounces into near 3/9. To reiterate: “the 1/26 price High is a defined extreme. The “bounces into March will be a big tell and maybe a big opportunity.” So far, the market has proven a low and trades well. It is fine for it to be confusing this week but still has upside into March 9-ish. I do see another corrective profile from which has some teeth. The fun will continue. 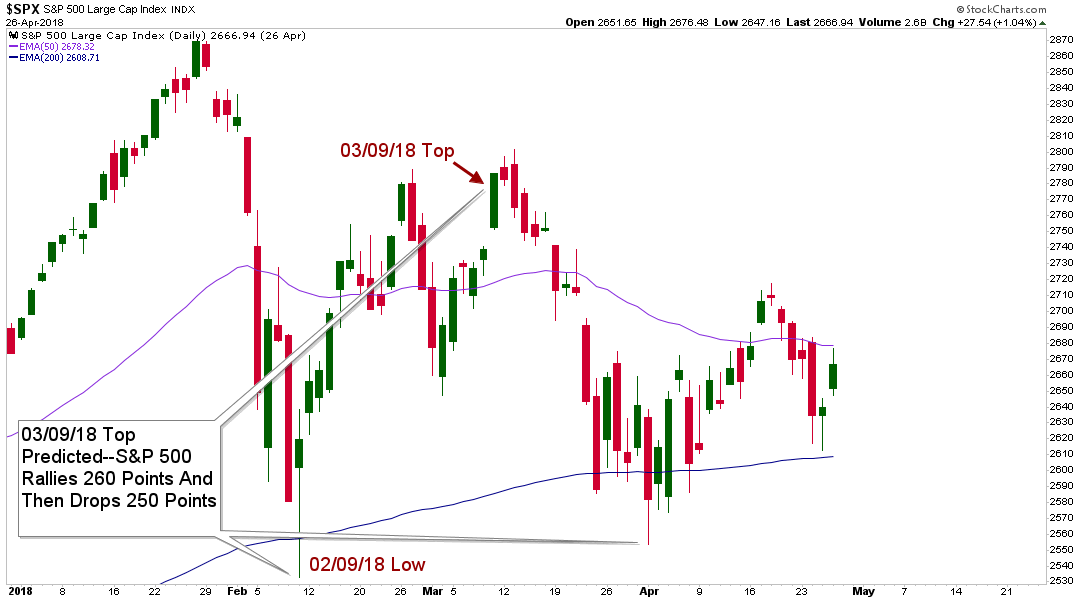 Potential up-trades into 8/14-8/21 would be an opportunity for the short side. That does not mean there is a defined new High coming. Stocks may just back and fill before breaking down. Interim Timing profiles are Bearish. 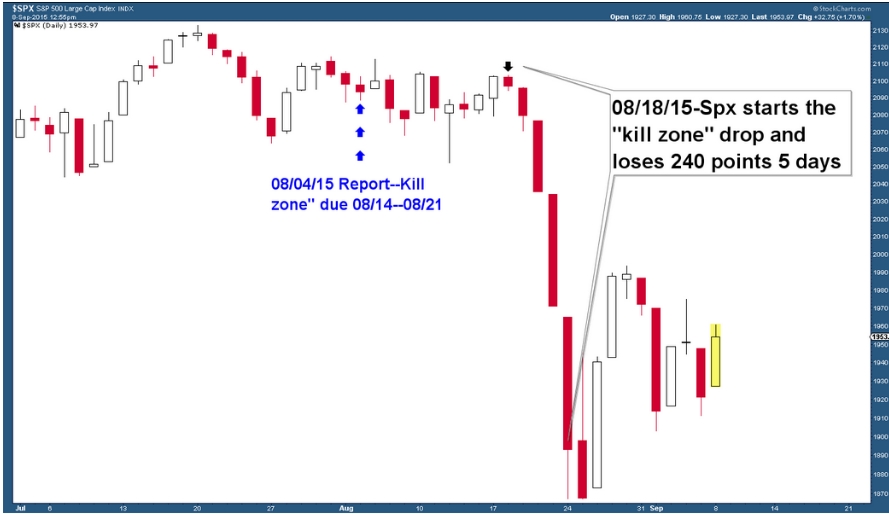 Woody and Gary, Thanks for guiding us and communicating so much during these crazy market times! You help us maintain our wits! Becky M

April 30, 2015 MARKET COMMENTS by Woody Dorsey: The last 2 days of trade argue that the 4/27 High was cogent. It is of particular note that DAX and Bunds have really broken. This is Key to the potential for pandemic equity declines. There could still be a pop into month end but the Negative magnet in May 22ish is at work. The 5/15 node may be when there is an overt break of support which sets off real selling. Prefer to see Greece get viral again. As I noted, social unrest is never Bullish. Enjoy some Market Reality 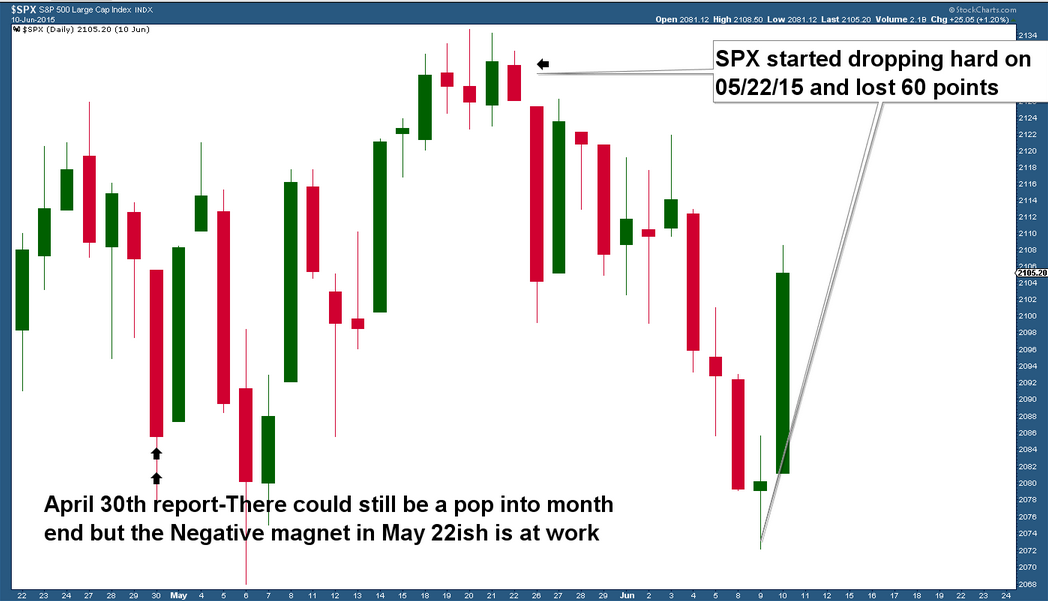 09/03/2015 MARKET TIMING: The “Kill Zone allowed for Trend Persistence on the downside. There should be High Volatility around 9/17 which is separate from, but synchronized with, the much heralded FOMC meeting. The preference is for downside to gather momentum after that. 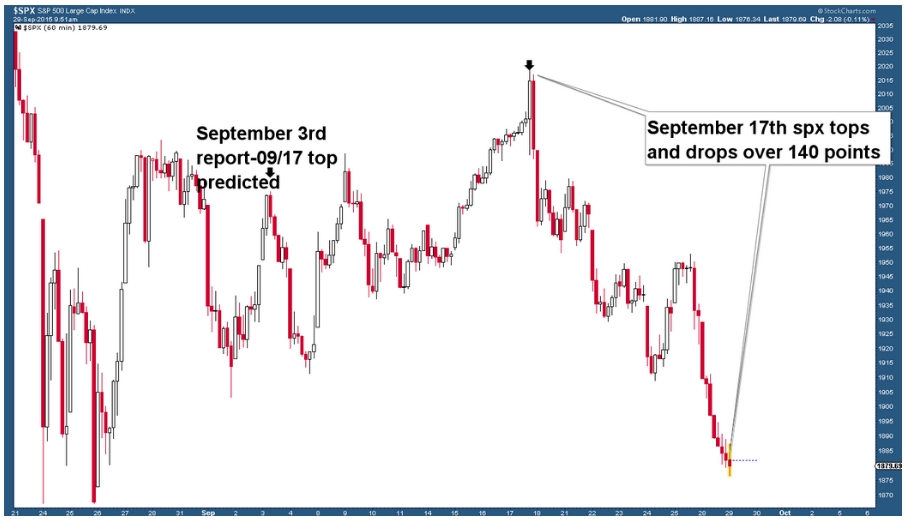 ​February 26,2015 MARKET TIMING: Near term Timing Profiles are still subsumed by the larger Global Equity Breakouts. Preference was for upside drift into month end. That has been occurring. Then there is the “Potential” for declines from 3/4-5 into 3/11-16. Pullbacks into there could be sharp into some deep and defined Support and would set up the next Rally Potential. 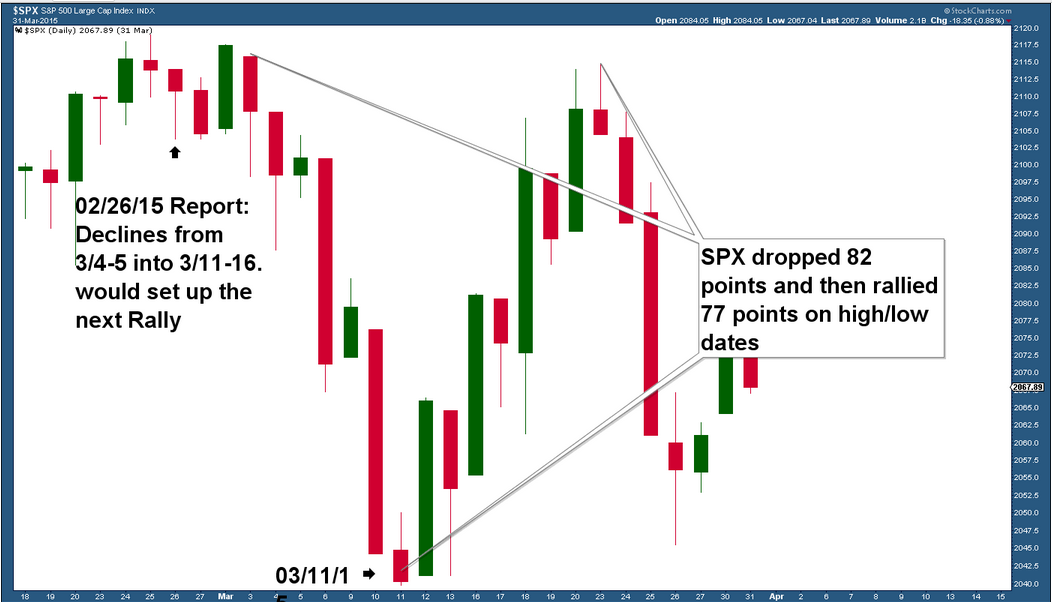 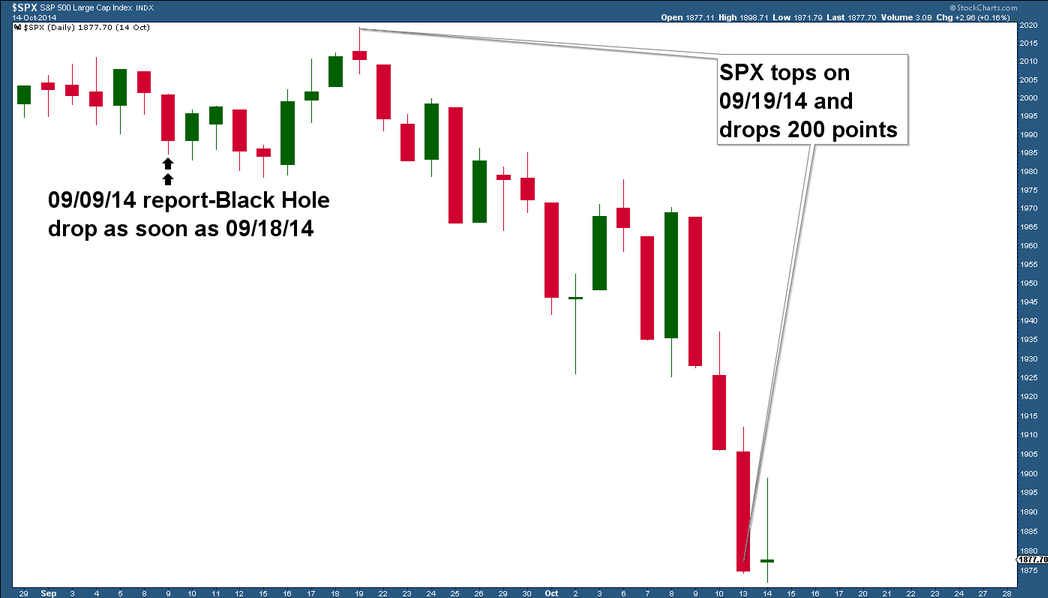 There aren’t many analysts in the world worth following. Woody Dorsey is an exception. His methods of analysis have kept me on the right side of markets at both major and intermediate turning points over the years.

I would not like to be on the other side of a trade with Woody Dorsey.”  Felix Zulauf  President, Zulauf Asset Management