[newsletterchapter2 title=”GENERAL MARKET COMMENTS”]  This is an e-mail alert added to yesterday’s full report-based off of today’s market action.

The gap up today and subsequent weakness is a sign that the minor negative node due next week is having an influence. This sets up for a weak Friday/Monday nexus. Remember this is just a trading market.

The launch from the mid October Black Hole/ Ebola Low does have a bullish interim look and a positive seasonal. But, the very near term sentiment and price pattern technology argue for upsets dead ahead.

[/newsletterchapter2][newsletterchapter2 title=”MARKET TIMING FACTORS”] The Negative Price Magnet (Black Hole) on 10/15 Recycled Risk Appetite and launched a new leg up. As noted, “There is a dearth of important near term nodes.” There are lesser but overt negative energy nodes “due 11/10 and also near 11/18.” Those nodes were deemed to only have local timing. Thus, they have had little “pull” so far. That profile inferred: “Upside into month end.” Now, that 11/10 node should begin to influence Equities.

[/newsletterchapter2] [newsletterchapter2 title=”MARKETS AS METAPHOR”]  Financial Culture Complacency was completely dispelled but, then Panic was discounted. Now, a new strange Ebullience is returning. This infers that a new Vulnerability is brewing. Next 2 weeks may not be EZ.

[/newsletterchapter2] [newsletterchapter2 title=”RELATED MARKETS”] Gold was not able to go up and has entered a new Capitulation, “into year end.” Treasuries put in a Spike High but are still not capable of reversing meaningfully? Energy had a profiled “Capitulation zone” near the Black Hole. Energy Equities did have a great Reversal but Crude did not. Many of these Behaviors are under the thumb of the strong Dollar Gestalt.

[/newsletterchapter2][newsletterchapter2 title=”SENTIMENT INTERPRETATION”]  The best Sentiment interpretation remains that a strange potentially violent Range may continue. Exceptional Low sentiment of “0%” confirmed the Capitulation on 10/15. I had allowed last week that the typical Post-Capitulation Rebound should continue. It did, but there has now been a 93% Bullish reading after the big run into month end. Upside is now limited but stocks may stay sticky for a bit.

[/newsletterchapter2][newsletterchapter2 title=”INTERMEDIATE TERM SENTIMENT”] Intermediate Sentiment indicates that a pessimistic extreme of note occurred @ the Black Hole Low. Panic evaporated and prior Bullish Expectations have been Recycled back into the Psychological consensus of Wall Street. However, the surprise could become that Stocks could enter a Hard Churn not a Hard Rally.

[/newsletterchapter2] [newsletterchapter2 title=”THE TECHNICAL VIEW”]  The SPX  broke through the rising wedge-primarily because of “time’ There is support at 1988-ish and then 1973. Seeing some backing and filling would make sense. Below 1973, we could see a larger retracement.. If the bulls try higher, watch the 2030-2040 area as resistance. I am not sure they have enough gas in the tank to get there-especially with the high bullish sentiment readings. 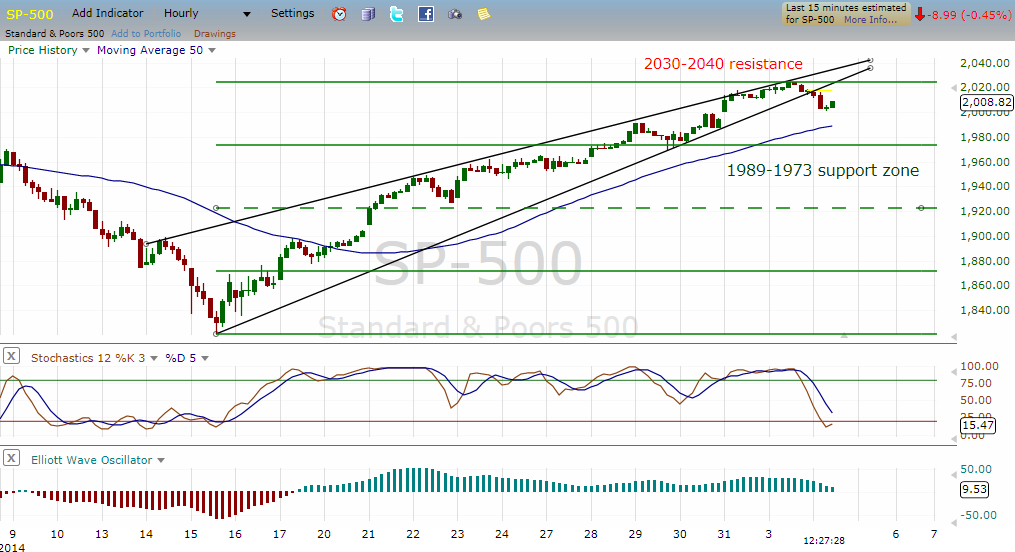