[newsletterchapter2 title=”GENERAL MARKET COMMENTS”] Woody is traveling today with limited access to his computer-so this report is exactly the same as Tuesday-except for the comments below. The full report will be out Tuesday.

Yesterday’s trade was really uber boring. The FOMC got a lot of press but was pretty meaningless. Still stocks show a willingness to correct but, not importantly.

They may just waffle into the month end. Yes there are some negative nodes in 2 weeks or so and stocks will get hit into them but that trade is not actionable yet. So, sloppy holiday trade for now. Don’t force a big picture. Wait for better set ups”

[/newsletterchapter2][newsletterchapter2 title=”MARKET TIMING FACTORS”] The Negative Price Magnet (Black Hole) occurred on 10/15 was cogent. Stocks continue to rebound from that event. What a wonderful trade from 9/19 to 10/15!  There is a dearth of very important near term nodes. Thus, “relatively ordinary trading” may continue.

There are lesser but overt negative energy nodes due 11/10 and also near 11/18. Those may be notable but only with local timing. That is, over only a few days. Upside into month end.

[/newsletterchapter2] [newsletterchapter2 title=”MARKETS AS METAPHOR”] Financial Culture Complacency was completely dispelled as overt Negatives were overwhelming. But the Capitulation did discount all of that. The Market is resuming some normal trading behavior.

[/newsletterchapter2] [newsletterchapter2 title=”RELATED MARKETS”] Gold bottomed but does not seem to be able to go up. It may just simmer and suffer into year end. Treasuries put in a Spike High but are still not reversing meaningfully. The Energy area had a profiled “Capitulation zone” on the Black Hole and did reverse. It is still relatively sober though.

[/newsletterchapter2][newsletterchapter2 title=”SENTIMENT INTERPRETATION”]  The best Sentiment interpretation remains that the 9/19, BABA High was cogent but maybe only temporary? Exceptional Low sentiment of “0%” confirmed a Capitulation on 10/15.

Stocks are still in typical Post-Capitulation Rebound. There is not yet a defined signal that Stocks are really set up again for another serious decline. Thus it may be prudent not take the day to day trade too, “seriously.”

[/newsletterchapter2][newsletterchapter2 title=”INTERMEDIATE TERM SENTIMENT”] Intermediate Sentiment indicates that a pessimistic extreme was registered @ the Black Hole Low. The Panic has evaporated and the prior Bullish Expectations are filtering back into the investor Psyche. Thus, the big excitement for the year may be over! What if we are just in Ranges? Tech looks like it wants new highs.

[/newsletterchapter2] [newsletterchapter2 title=”THE TECHNICAL VIEW”]  The SPX  has been on a tear off the expected lows. There is some resistance between 1975-1982. With the bearish divergences-IT MAY cause a set back to this massive run.

The bearish rising wedge is a bit suspicious as well, but it can extend further than many think. Cautious may be the best way to look at the trading environment. We have come a long way in a fast manner. 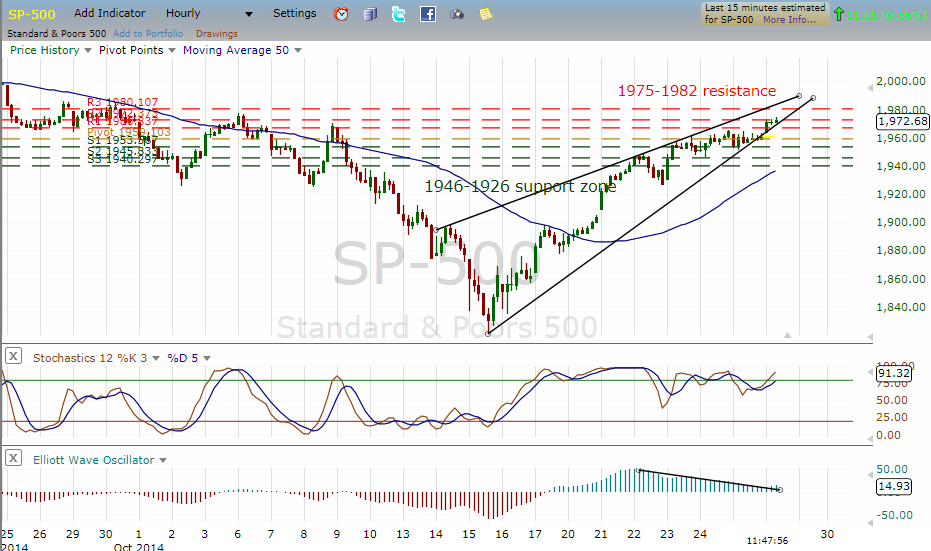