GLOBAL MARKET COMMENTS by Woody Dorsey: Stocks continued their “slow motion breakout” as expected. The 97% Bullish on 2/17 indicated an excess of optimism and signaled the potential for indigestion. Indeed, the market went nowhere for several days so, “there was no Trading Edge.” This illustrates the difference between Qualitative Time vs. Quantitative Time. My Timing studies can indicate when Stocks might make a big move and when they are unlikely to move importantly. I suggested Stocks might not have much “Energy” last week. Quantitative time (Market Motion) is different than Qualitative Time (Market Energy.) Thus last weeks rangy trade was apt. Now, the Reversal on Friday fits with new Upside Market Energy. Date Clusters over the next 6 weeks are dynamic but not obvious. Pattern wise, Stocks may need, within their Breakout, a more defined shakeout before they set up for another move higher.

Repeat: “Small position sizes are preferred. Breakouts are hard to trade.” The Sentiment and Price indicants from 10/15 and 2/2 infer further upside potential.

MARKET TIMING ANALYSIS:  Near term Timing Profiles are being subsumed by larger Global Equity Breakouts. Preference was for some setbacks then a drift higher into month end. Then there is the “Potential” for declines from 3/4-5 into 3/11-16. Pullbacks into Support would set up the next Rally Potential.

RELATED MARKET “TELLS”: What I am “looking” at, and “listening” to, for S&P insights: Expected weakness in Precious Metals suggested that “Greece was Moot.” Treasury Breakdowns were, “S&P positive.” Stock and Bond Behavior has ratified a new relationship which is now being recognized as an overt divergence. Bonds are no Good but Stocks are still Good! Very Good?

SENTIMENT INTERPRETATION: The Reversal on 2/2 with 90% Bullish was a subtle Low. While I noticed and commented on that, it was not fully understood until a week or so ago. It inferred a Breakout. Sentiment Diagnosis, not just Sentiment Levels, are usually as important as Timing. Fridays’ Reversal thrust makes Fridays Low print a key support. Todays’ 93% is best interpreted as a further ratification of the Breakout.

INTERMEDIATE TERM SENTIMENT: Interim Sentiment has “rallied” from relatively low levels. This supports the importance of the 2/2 Low. The Upside remains open. but it won’t be easy to trade. The next key for me will be to Diagnose an Interim High but that needs more time to become defined.

MARKET SUMMARY: S&P continues its’ Breakout. Near term price patterns are challenging while the intermediate term pattern remains bullish. Volatility should pick up next 6 weeks. The 2/20 Low is new Support.

TECHNICAL VIEW by Gary Dean:  The SPX continues to find dip buyers. Last week we identified 2086 as a support level and that turned out to be the exact low before a new high was made. The wave structure had to be modified because of the new high and the best view is the SPX is making a wave 5 of (3) here. In layman’s  terms, once this wave 3 completes, we should see another drop down towards the 2086 support. That would be a larger wave 4 down, which would then be followed by another thrust to new highs to complete the 5th wave.

Now there are enough waves to have completed this wave (3) as well as high bullish sentiment, so one has to be open minded that the SPX may be on its way to testing the 2086 level-to make the wave (4). The first signal for that scenario to play out, is a break of the support 1 line at 2102. That would increase the odds of 2086 or support 2 being tested.  Anywhere between 2086 and 2080 would make sense to find buyers. The line in the sand for this wave count road map to not be valid-is if 2070 gets taken out. Then something else is going on.

For now-leave the door open for a test of 2086 if the 2102 line is taken out. But another new high would also make sense, which most likely will find sellers, as the wave structure is mature at this time. From a technical view as well as wave counts-there is no advantage right now. A better buy spot would be closer to the 2086 level. 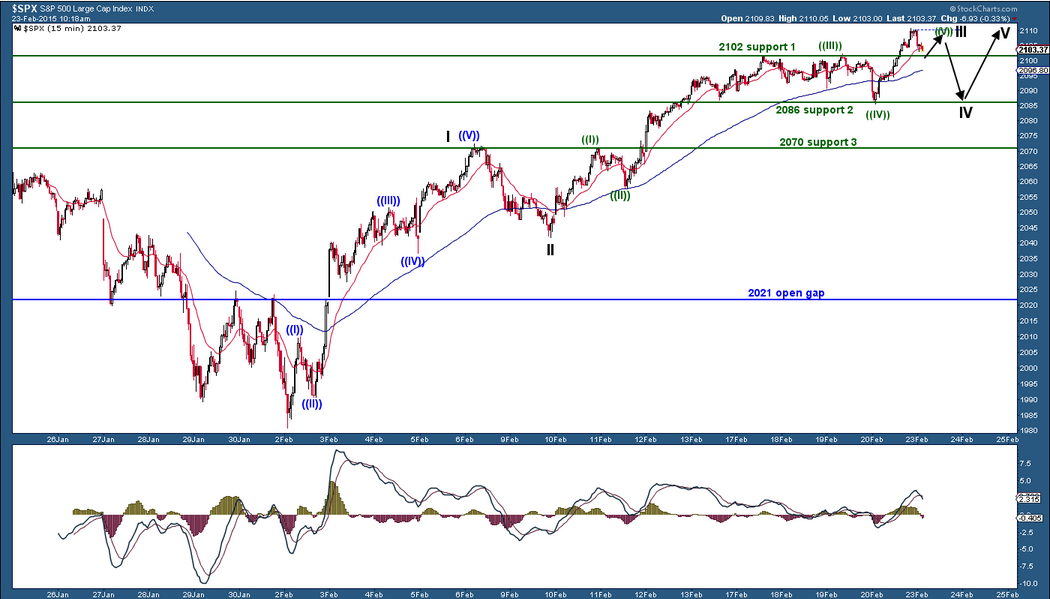 Information is for paid subscribers & may not be copied or distributed. © Copyright 2015. The information contained herein was provided by Sentiment Timing and/or its publishers does not make any representation or warrant with regard hereto, including but not limited to those of accuracy, completeness, reliability, timeliness and/or infringement on the rights of third parties. This Publication expresses a view on the markets but is not intended to provide any specific recommendation to buy or sell any security. Investing is Uncertain and always carries Risk. Of Losses. Subscribers should always assess Market Risk parameters with their broker or financial advisor.

Information is for paid customers and may not be copied or distributed Copyright 2015
“I have benefitted from Woody Dorsey for over 13 years. The proprietary sentiment indices have been of immeasurable value in positioning for major moves in US capital markets.”
- John Porter, Global Fixed Income Manager